A unique garden is evolving on Milwaukee’s south side. The Gerald L. Ignace Indian Health Center’s Native Wellness Garden boasts a variety of heritage plants, both food and medicinal. It also includes a heritage orchard with an Oneida apple tree, a Milwaukee apple tree, chokeberry and hazelnut trees plus fruits such as blueberries and strawberries. 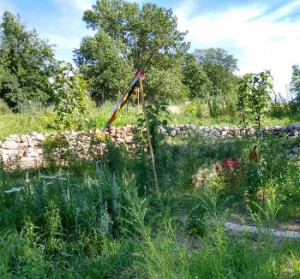 The garden, located on South 6th Street near Howard Avenue, also includes a medicine wheel divided into quadrants – the North quadrant, for example, includes sweetgrass and sage; a pollinators’ garden of prairie plants; an Elders’ garden with benches for sitting and enjoying the flowers.

Future plans including building a “poly” house – a fabric hoop house – that will extend the growing season.

This garden represents a very fruitful collaboration between the Native American community and the Milwaukee County University of Wisconsin Extension’s (UWEX) Urban Agriculture Department. It is on the former Interurban train site where trains ran between Milwaukee and Chicago.

Dennis Lukaszewski, UWEX Program Coordinator/Community Garden Director, headed restoration of the site for community garden plots. Tapping into free resources, he hauled in tons of earth from nearby sites, compost and fill from Glendale, topsoil and soil from new home construction in Franklin, even leaves from South Milwaukee’s fall collection. 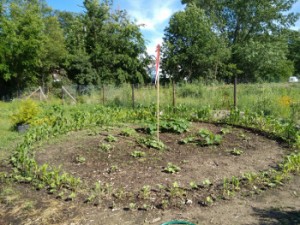 Three loads of field stone from a tear-down wall in Franklin were used to build amphitheater seating for ceremonies, drumming, talking circles and meetings.

This is not the first Native American garden. Dietician Jennifer Casey, formerly Diabetes Coordinator at the center, said an earlier garden is still in use at Tippecanoe Presbyterian Church. The center also worked with Milwaukee Public Schools First Nation Studies to offer a small number of plots at Kosciusko Park. “The total game changed when we linked up with UWEX,” she says.

Jennifer met Ryan Schone, UWEX Local Food Systems Educator, at a conference. When he told her about the new south-side rental gardens, she saw potential for an expanded wellness garden.

The health center hosted a visioning meeting early in 2013 bringing together Native American community leaders, Elders, young people interested in healthy food, etc. The consensus was to grow traditional food and medicines and provide produce for the Siggenank food pantry at the Great Spirit Church.

Sarah Goerke, R.N. C.D. who has served as Interim Diabetes Coordinator says the first year was basically “grunt work” as the infrastructure was being developed. This included an opening “Dig In” with volunteers from the Indian Community School. 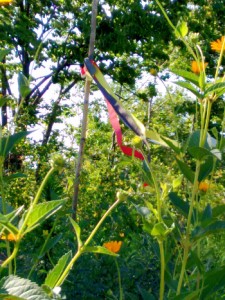 The garden has also benefited from grants from Milwaukee’s Victory Garden Initiative and the First Nations Development Institute in Colorado. The first chose the garden as one of its” fruity-nutty five” and provided apple, pear, plum and cherry trees plus hickory and blackberry bushes and grapes.

A Garden Club has been established by Garden Coordinator, Lotus Bailey. Volunteers can work from 4:30-6:30 –pm on Tuesdays and Saturday from 10 am to noon.

The garden has received praise from local leaders. Jason Haas, Milwaukee County Supervisor for the 14th district, says “UW-Extension’s creation of the Native American Garden on South 6th Street is a wonderful way to bring the land to life. It is a wonderful addition to the rejuvenation of this corridor. I look forward to great things there.”

Terry L. Witkowski, Alderman for the Garden District, says “This garden is another great use of the Garden District and Green Corridor by UW-Extension. When Ron Winkler (author and lecturer) spoke about the history of the Town of Lake he mentioned that the 6th Street area of the Town of Lake, now the Green Corridor and site of community gardens, has returned to its roots since the area once had many truck farms. It seems the Gerald L. Ignace Native Wellness Garden really takes the area back to its original roots with traditional Native American crops, including planting practices dating back 5,000 years.”

Do you love our programs? Click the Donate Here button to make a tax-deductable donation.

We teach, learn, lead and serve, connecting people with the University of Wisconsin, and engaging with them in transforming lives and communities.

Connect with your County Extension Office »

Find an Extension employee in our staff directory »

An EEO/AA employer, University of Wisconsin-Madison Division of Extension provides equal opportunities in employment and programming, including Title VI, Title IX, the Americans with Disabilities Act (ADA) and Section 504 of the Rehabilitation Act requirements.